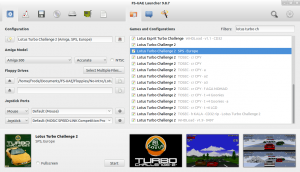 Screenshots should not be uploaded without considering whether they are suitably cropped. Some screenshots floating around the net are also too heavily cropped (typically games > 200 pixels height).

Additional requirements and guidelines for screenshots:

The images must not be compressed with lossy compression (Don’t use JPEG). PNG format is recommended, but GIF is acceptable provided it can store all colors without loss of data.

Title screens can be a bit harder to identify and even to find. Often cracking groups removed the real title screen in order to save some space on the disk for their cracktro. As an example let’s have a look at Rock ‘n Roll:

This is the correct title screen to use. For the OAGD.net title screen shot we decided to let the cute little green alien walk into the picture with the publisher 😉

In other cases the correct title screen is even more hidden. The next example is Spellbound Dizzy. Since we already know we should use the IPF version for this game, let’s check for the first screen that appears:

No title screen it seems. On the Hall Of Light there is a different title screen though. You have to wait for quite some time until the real title screen will show up:

You should have a look on the Hall Of Light for the specific game if you got the correct title screen. Of course there are cases where it’s not obvious which screen should be used, but please consider these guidelines.

Some screenshots are trivial to crop, in the following example (ingame graphics from Lotus Turbo Challenge 2), the actual graphics are 320×200, and you can simply crop away the black borders (remember, only crop, don’t rescale):

But you cannot always simply crop away black borders. Using the title screen of Lotus Turbo Challenge 2 as an example, you can see that the main graphics has large black areas. Please note that the title screens does not necessary use the same size as in-game graphics, but in this specific case, we can use the exact same 320×200 crop rectangle as the in-game graphics for a nice (and correct) result:

By cropping the following image as tight as possible (while still including all content), the crop would be 320×192. But in this specific case, the 1 pixel black order surrounding the “internal play area” will not look great when displayed in a program UI with borders around the screenshots. Here, we also crop away 1 pixel more on the left, right and bottom sides for best result (size of resulting image is 318×191 pixels):

Here is another example where it is initially a bit difficult to see where to crop -but this screenshot compared to the next from the SCUMM bar. When in the SCUMM bar, you can more clearly see where the top / left / right borders are. In this case, the bottom border was located by moving the cursor to the bottom of the screen (though I wouldn’t leave it there for the final screenshot). The results are nice 320×200 screenshots for Monkey island:

Screenshots can be easily created with FS-UAE or other Amiga emulators. FS-UAE will save both cropped and un-cropped versions. In many cases, the cropped images can be used as-is, but crop the uncropped screenshot manually if the automatic crop procedure does not crop the image correctly (see the above section about cropping).

I believe screenshots and cover images can be sourced from other websites as well, at least individually. As far as I know, these sites can not claim copyright on the images itself (Though a site may possibly claim some ownership on the collection as as whole). If anyone can claim copyright on individual screenshots and box art, it is the copyright owner of the game (game publisher, probably). Using images for illustrative purposes should be within the realm of fair use.

But if you can take new screenshots, that’s generally the best.

Hall Of Light is a great Amiga game information resource, but sadly, they have chosen to watermark all of the box images and screenshots 🙁

This site uses Akismet to reduce spam. Learn how your comment data is processed.