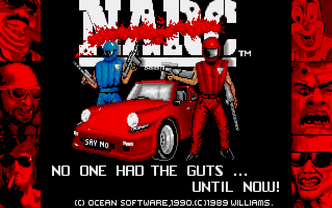 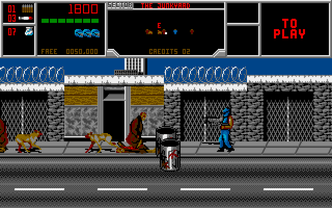 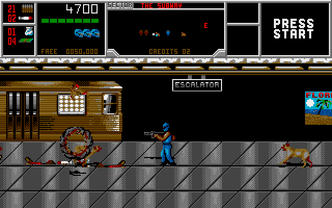 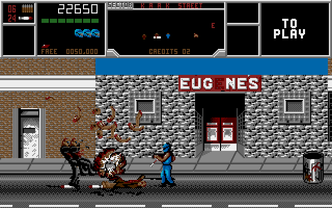 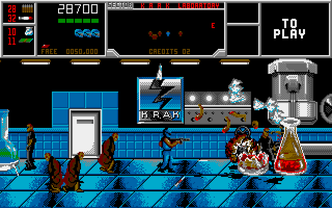 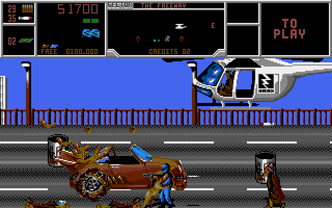 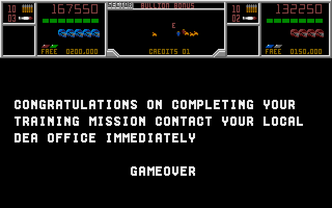 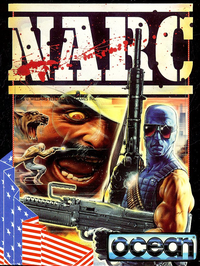 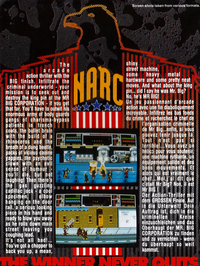 The arcade ation thriller with the BIG finish. Infiltrate the criminal  underworld - your mission is to seek out and destroy the king pin of the  MR BIG CORPORATION - if you get that far. You'll hve to outwit his  enormous army of body guards, gangs of charisma-bypass patients in  trench coats, the bullet brain with the build of a rhinoceros and the  breath of a dung beetle, packs of vicious canine yappies, the psychotic  clown with an evil sense of humour - you'll die, but not laughing! Then  there's the gas guzzling cadilac jock - a cool specimen, elbow hanging  on the door rail, a serious looking piece in his hand and ready to blow  you away as he rolls down main street leaving you coughing lead. It's  not all bad!... You've got a chopper to back you up, a mean, shiny  street machine, some heavy metal hardware and some pretty neat moves.  And what about the king pin... did i say he was Mr. Big? No. he's MR BIG! — Game Box

Narc is a 1988 arcade game designed by Eugene Jarvis for Williams  Electronics and programmed by George Petro. It was one of the first  ultra-violent video games and a frequent target of parental criticism  of the arcade game industry. The object is to arrest and kill drug  offenders, confiscate their money and drugs, and defeat "Mr. Big".

It was the first game in the newly restarted Williams Electronics  coin-op division, and features their notable use of digitized  graphics (later made famous in games such as Mortal Kombat).  In fact, the quality of the graphics in terms of number of colors  would not be surpassed until the game Mortal Kombat II  (released in 1993). The game features what in arcade terminology is  termed a medium resolution monitor – higher resolution than  televisions and normal arcade monitors, although often in a smaller  physical size. NARC was also the very first arcade game to utilize  the TI TMS34010, which is a 32-bit processor. The game was also  notable for the numerous voice samples used during and between  levels.

Narc was ported to the NES and several home computer systems in 1990.

Programmed by David Leitch at Sales Curve Interactive and published by  Ocean Software, the versions of the game for the ZX Spectrum and  Amstrad CPC computers generally received positive reviews,  including 9/10 from CRASH, 8/10 from Sinclair User and 72% from Your  Sinclair. Matt Bielby of Your Sinclair called it "one of the most  objectionable Speccy games I've seen in ages", and called it  "repetitive" and the plot "utter nonsense. "