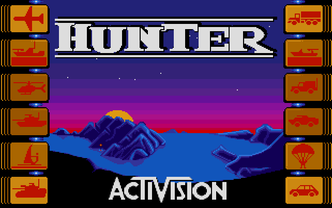 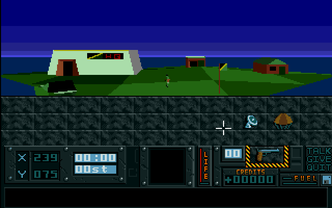 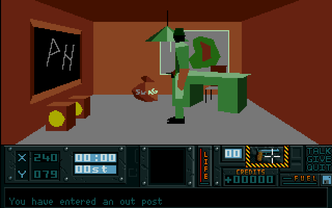 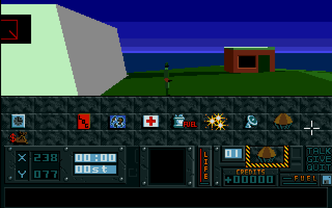 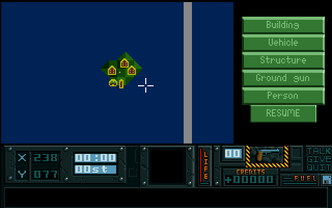 The use of a joystick emulated by keyboard keys may interfere with this game: up and down arrow are used to zoom the view in and out when in a vehicle. 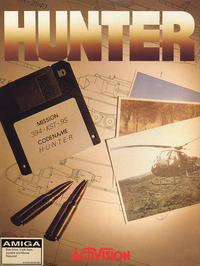 Hunter is a 3D action-adventure game in which the player navigates around a series of islands. Hunter was developed by Paul Holmes and Martin Walker (music), and it was released by Activision for the Amiga and Atari ST home computers in 1991. 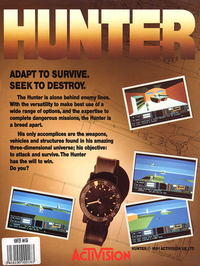 The player controls a soldier in a large three-dimensional world where he can move freely by walking, swimming or using various vehicles such as cars, vans, tanks, ships, bicycles, helicopters, hovercrafts or even rowboats and surfboards. Each vehicle type has its unique properties. The game world also features a large variety of buildings, most of which can be entered and explored. Other in-game characters include enemy soldiers, civilians and animals such as seagulls, sharks and cows. The player also has a wide range of weapons ranging from a regular pistol to SAM-missiles, grenades, land mines and timed explosives. Surrounding terrain can be surveyed with aerial observation units and radar. Food and money can be used to bribe and gather information from other characters. Target coordinates can be recorded into a log book, and the player can see his position in the game world on an overlaying map.

Hunter features a rather sophisticated AI for its time. In addition to shooting, enemy soldiers can also drive vehicles and track the player down. Guard towers, tracer guns, cannons and SAM launchers have the ability to shoot towards the player, and homing missiles launched by the enemy accurately follow the player's vehicles. Birds can also flock around the player, which can cause them to get killed by a vehicle.

The game is controlled mostly via joystick and mouse. The joystick controls the directional movement of the character, and the mouse is used in the selection of weapons and items. Keyboard can be used to give input and zoom the view towards or away from the character.