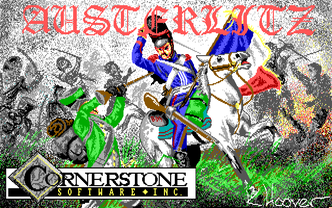 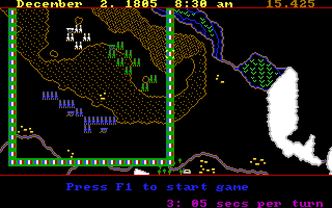 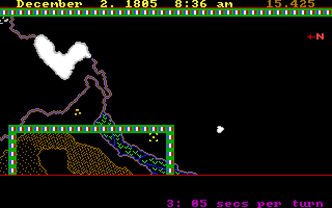 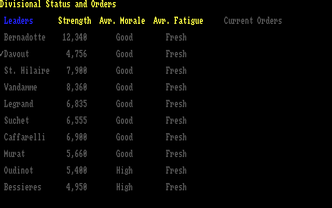 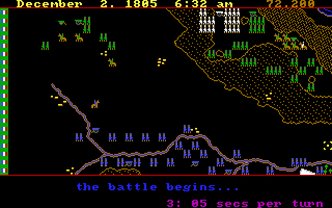 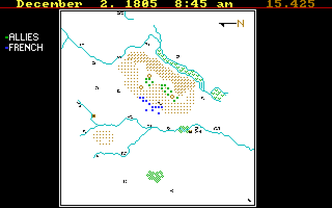 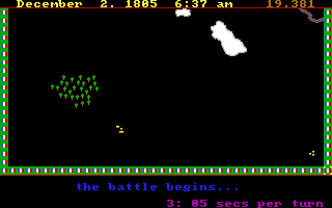 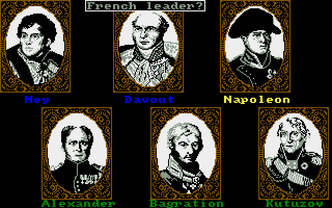 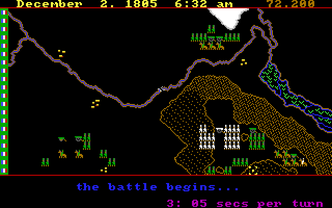 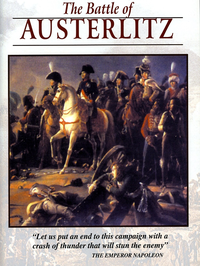 The Battle of Austerlitz is a Historic Turn-Based Strategy game, developed by Cornerstone and published by General Quarters Software, which was released in 1989.

Austerlitz is a grand tactical military simulation of Napoleon's first major battle as Emperor of the French. At Austerlitz he met and soundly defeated the combined armies of Russia and Austria.

With English gold supporting Royalist plots against France, and Napoleon training what would eventually be the Grande Armee', the Treaty of Amiens was destined to fail. In 1805, England formed the Third Coalition, consisting of Austria, Russia, Naples and Sweden. Napoleon wished to invade England, and stop the wars at their source. However, English domination ofthe seas, and the gathering storm to the east led to a drastic change in plans; before his enemies could combine for their advance into France, he would have to swiftly deploy eastwards and defeat them in detail. For the Allies, it was a matter of survival for their regimes. They had first thought little ofthe French Revolution, but now for ten years they had been at war, first with the radical revolutionaries who pledged that all kings should die, and next with the unconquerable Napoleon. For them, war was necessary to reestablish the old order, which of course was how God intended it to be. The Austrians confidently went forward before their Russian allies arrived, and paid for it at Ulm; an entire army surrounded and captured. Within the first few weeks of the campaign, Napoleon stood triumphantly on the Danube. However, all was not safe for the Emperor. The Austrians had an army in the south, and another organizing in the north. He was far from home with his lines of communication unsafe and supplies running out. He had to end the war. With the Russians finally arriving in strength, and desertion in his army growing as the winter wore on, conditions seemed bleak. The Allied plan under Kutuzov was sound . Wait and gather their strength, and let the French retreat or fight a battle on the Allies' terms. But when the young wolves on Czar Alexander's staff saw Napoleon in an apparently weak position near Austerlitz, they had to give battle. Glory was for those who acted! Napoleon bloodied the bait with a feigned retreat off the Pratzen Plateau, which ending the Allied debate. They would attack! Sweeping down offthe Pratzen they now possessed, they would turn Napoleon's weak right under Legrand and roll up his entire army. Kutuzov asked what they would do in case Napoleon did not sit still for their masterpiece? He spent the rest of the battle asleep or drunk, unheard. December 2nd opened with a thick fog. The Allies set their plan into motion, not knowing that Napoleon intended to smash their center just as they left the Pratzen. As long as Legrand could hold the Allies just a little while, the Allied army's fate was virtually sealed. The Allied advance was slow and bungled. Entire columns crossed through each other. Legrand was pushed behind the brook, but Davout arrived in time from the south, leaving the Allied advance stymied. As the sun rose over the hills and burned away the fog, Napoleon launched Soult (St. Hilaire and Vandamme), against the Pratzen. The decision swayed in the balance for a short time, but finally the Allied line broke, and the plateau was taken! At the far left of the French line, Lannes and Bagration sparred off with the opposing Heavy Cavalry of both armies charging each other, making much noise but with little results. On the right, Napoleon personally directed the destruction of the Allied left while Bernadotte thwarted Constantino's attempt to save the Allied center. Around 4:30 pm a snow storm brought the battle to an end. The French had won a decisive victory, while Czar Alexander was left weeping. The French had less than 2,000 dead, with approximately 7,000 wounded. The Allies suffered at least 15,000 killed and wounded with a further 10,000+ captured. The French took home forty-five enemy standards and over 180 Allied cannon. The Russians returned home, and the Coalition collapsed. The ruling members of English aristocracy raged... the revolution would live!