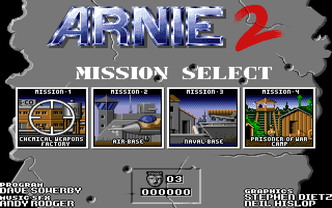 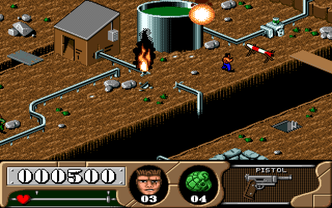 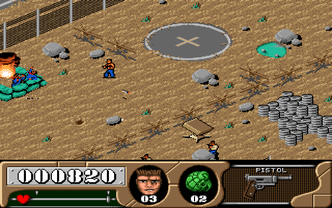 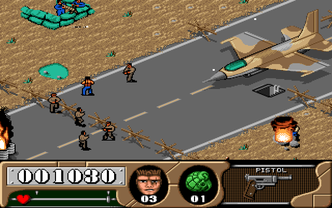 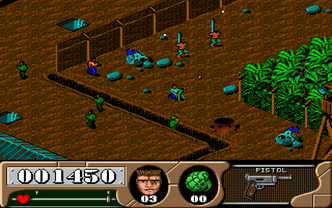 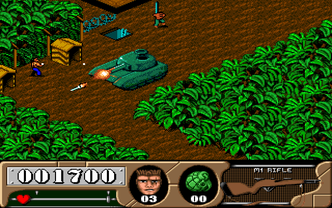 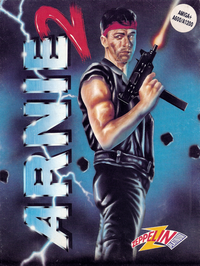 Arnie 2 is an isometric action game. Although it's obvious to which Hollywood actor the game's name alludes, Arnie 2 is not a licensed title and not based on any movie.

It is the sequel to the Amiga / C64 platform game Arnie (1992). Unlike the previous title it has been developed in-house by Zeppelin

Fast reflexes and a lust for violence are required for success here. Your average muscleman shoots and bombs his way through four enemy-infested territories: Shut down a chemical plant by blowing up enough pipeline valves. Clear an airfield from enemy soldiers, tanks and helicopters. Climb from battleship to battleship in a hostile harbor. And finally, rescue as many prisoners as possible from a jungle POW camp.

Naturally, the levels are crawling with enemies: from simple infantry armed with rifles, mortars or rocket launchers to MG teams, missile batteries and tanks. Most of the opponents are stationary and stolidly fire in a single direction; however, foxholes spew out cannon-fodder at a constant rate. To destroy such nests or efficiently dispatch groups of soldiers, Arnie has a (limited) supply of grenades. Some deceased foes drop more powerful weapons as well as invaluable first aid kits and extra lives.