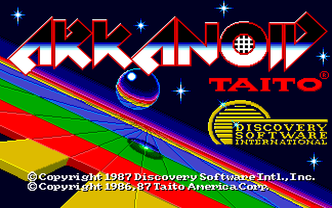 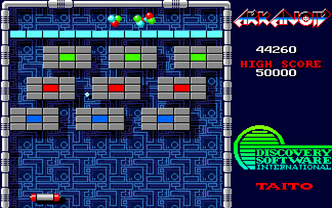 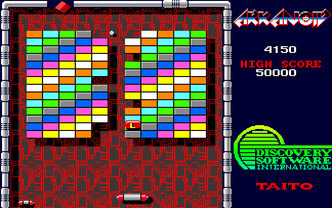 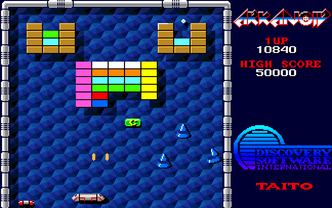 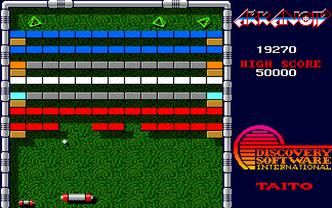 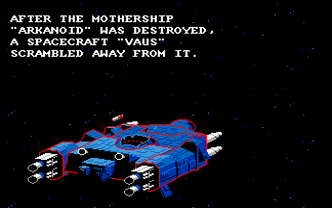 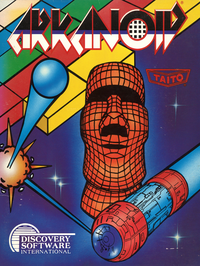 Aliens have destroyed your planet, setting you and the humans aboard the galactic cruiser ARKANOID adrift and searching for a new home. You are the only hope. Climbing into you vaus, you realise you must act quickly. You have some weapons, but against the certain danger that lurks ahead, sheer nerve is your greatest strength. Hurtling through icy space, who can help but wonder, "What's out there???'" 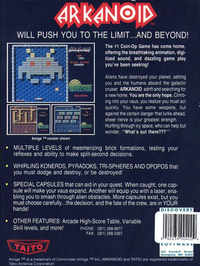 The player controls the "Vaus", a space vessel that acts as the game's "paddle" which prevents a ball from falling from the playing field, attempting to bounce it against a number of bricks. The ball striking a brick causes the brick to disappear. When all the bricks are gone, the player goes to the next level, where another pattern of bricks appears. There are a number of variations (bricks that have to be hit multiple times, flying enemy ships, etc.) and power-up capsules to enhance the Vaus (expand the Vaus, multiply the number of balls, equip a laser cannon, break directly to the next level, etc.), but the gameplay remains the same. At round 33, the final stage, the player will take on the game's boss, "DOH", a head resembling moai. Once a player reaches round 33, he must defeat DOH with his remaining extra lives because there are no continues on the final round

The game opens with a monologue stating the following: "THE TIME AND ERA OF THIS STORY IS UNKNOWN. AFTER THE MOTHERSHIP "ARKANOID" WAS DESTROYED, A SPACECRAFT "VAUS" SCRAMBLED AWAY FROM IT. BUT ONLY TO BE TRAPPED IN SPACE WARPED BY SOMEONE........"