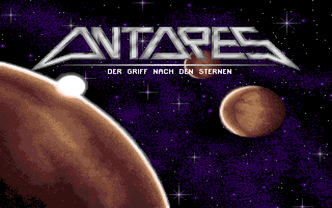 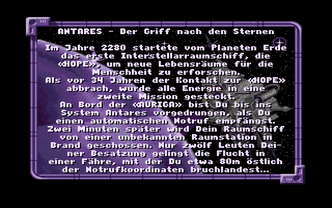 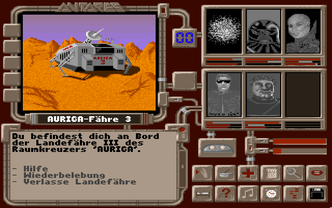 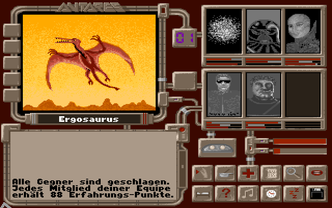 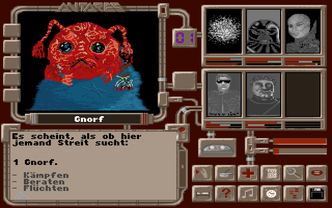 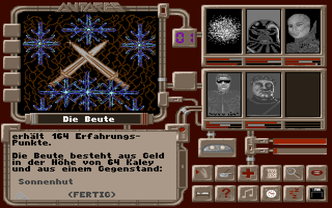 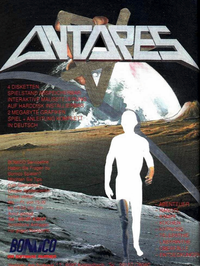 Antares is a classic role-playing game of the Bard's Tale variety set in a science-fiction scenario. After the radio contact with space explorers stopped, a second troop goes to look for them. Unfortunately on the way they receive a emergency call, get shot and have to land on the planet Kyrion. Now the troop has to explore the planet and find out more about what happened.

The party has six members (chosen from twelve pre-defined characters) with different statistics and abilities, e.g. fighting, cooking, PSI (the science-fiction variant of magic) or translating (needed to communicate with non-hostile species). The world and dungeons are explored through a first-person perspective and when meeting enemies, the fight plays out turn-based: the player tells the characters what to do and text informs of the results. Killing enemies reward experience points which in turn improve the abilities.

Each character has to eat and sleep. While too much hunger results in death, a sleeping character is in a kind of trance: he still walks around, but can't take any actions or fight. Besides sleeping, there is also medicine available to keep the spirits up: just like other parts of equipment, it can be bought in hidden shops with gold found at slain enemies. Each character can transport up to six items and a radar shows how dangerous the current area is. Dead party members can be resurrected at the landing module.